Education for the robot economy

Posted on February 1, 2019 by Ben Williamson 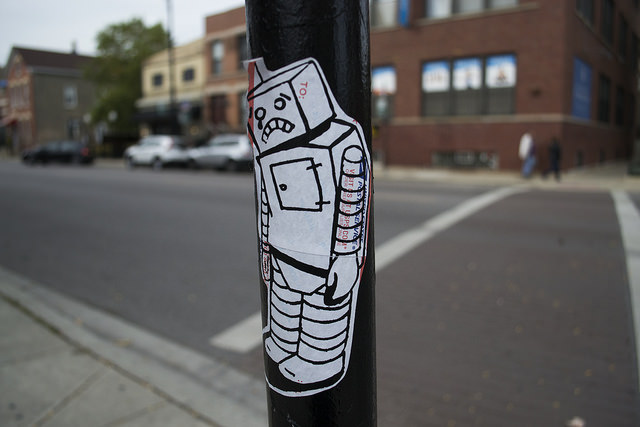 Automation, coding, data and emotions are the new keywords of contemporary education in an emerging ‘robot economy’. Critical research on education technology and education policy over the last two decades has unpacked the connections of education to the so-called ‘knowledge economy’, particularly as it was projected globally into education policy agendas by international organizations including the OECD, World Economic Forum and World Bank. These organizations, and others, are now shifting the focus to artificial intelligence and the challenges of automation, and pushing for changes in education systems to maximize the new economic opportunities of robotization.

Humans & robots as sources of capital
In the language of the knowledge economy, the keywords were globalization, innovation, networks, creativity, flexibility, multitasking and multiskilling—what social theorists variously called ‘NewLiberalSpeak’ and the ‘new spirit of capitalism’. With knowledge a new source of capital, education in the knowledge economy was therefore oriented towards the socialization of students into the practices of ICT, communication, and teamwork that were seen as the necessary requirements of the new ‘knowledge worker’.

In the knowledge economy, learners were encouraged to see themselves as lifelong learners, constantly upskilling and upgrading themselves, and developing metacognitive capacities and the ability to learn how to learn in order to adapt to changing economic circumstances and occupations. Education policy became increasingly concerned with cultivating the human resources or ‘human capital’ necessary for national competitive advantage in the globalizing economy. Organizations such as the OECD provided the international large scale assessment PISA to enable national systems to measure and compare their progress in the global knowledge economy, treating young people’s test scores as indicators of human capital development.

The steady shift of the knowledge economy into a robot economy, characterized by machine learning, artificial intelligence, automation and data analytics, is now bringing about changes in the ways that many influential organizations conceptualize education moving towards the 2020s. Although this is not an epochal or decisive shift in economic conditions, but rather a slow metamorphosis involving machine intelligence in the production of capital, it is bringing about fresh concerns with rethinking the purposes and aims of education as global competition is increasingly linked to robot capital rather than human capital alone.

Automation
According to many influential organizations, it is now inevitable that automated technologies, artificial intelligence, robotization and so on will pose a major threat to many occupations in coming years. Although the evidence of automation causing widespread technological unemployment is contested, many readings of this evidence adopt a particularly determinist perspective. The robots are coming, the threat of technology is real and unstoppable, and young people are going to be hit hardest because education is largely still socializing them for occupations that the robots will replace.

The OECD has produced findings reporting on the skill areas that automation could replace. A PriceWaterhouseCoopers report concluded that ‘less well educated workers could be particularly exposed to automation, emphasising the importance of increased investment in lifelong learning and retraining’. Pearson and Nesta, too, collaborated on a project to map the ‘future skills’ that education needs to promote to prepare nations for further automation, globalization, population ageing and increased urbanization over the next 10 years. The think tank Brookings has explicitly stated, ‘To develop a workforce prepared for the changes that are coming, educational institutions must de-emphasize rote skills and stress education that helps humans to work better with machines—and do what machines can’t’.

For most of these organizations, the solution is not to challenge the encroachment of automation on jobs, livelihoods and professional communities. Instead, the robot economy can be even further optimized by enhancing human capabilities through reformed institutions and practices of education. As such, education is now being positioned to maximize the massive economic opportunities of robotization.

Two main conclusions flow from the assumption that young people’s future jobs and labour market prospects are under threat, and that the future prospects of the economy are therefore uncertain, unless education adapts to the new reality of automation. The first is that education needs to de-emphasize rote skills of the kind that are easy for computers to replace and stress instead more digital upskilling, coding and computer science. The second is that humans must be educated to do things that computerization cannot replace, particularly by upgrading their ‘social-emotional skills’.

Coding
Learning to code, programming and computer science have become the key focus for education policy and curriculum reform around the world. Major computing corporations such as Google and Oracle have invested in coding programs alongside venture capitalists and technology philanthropists, while governments have increasingly emphasized new computing curricula and encouraged the involvement of both ed-tech coding products and not-for-profit coding organizations in schools.

The logic of encouraging coding and computer science education in the robot economy is to maximize the productivity potential of the shift to automation and artificial intelligence. In the UK, for example, artificial intelligence development is at the centre of the government’s industrial strategy, which made computer programming in schools an area for major investment. Doing computer science in schools, it is argued, equips young people not just with technical coding skills, but also new forms of computational thinking and problem-solving that will allow them to program and instruct the machines to work on their behalf.

This emphasis on coding is also linked to wider ideas about digital citizenship and entrepreneurship, with the focus on preparing children to cope with uncertainty in an AI age. A recent OECD podcast on AI and education, for example, put coding, entrepreneurship and digital literacy together with concerns over well-being and ‘learning to learn’. Coding our way out of technological unemployment, by upskilling young people to program, work with, and problem-solve with machines, then, is only one of the proposed solutions for education in the robot economy.

Emotions
The other solution is ‘social-emotional skills’. Social-emotional learning and skills development is a fast-growing policy agenda with significant buy-in by international organizations. The World Economic Forum has projected a future vision for education that includes the development and assessment of social-emotional learning through advanced technologies. Similarly, the World Bank has launched a program of international teacher assessment that measures the quality of instruction in socioemotional skills.

The OECD has perhaps invested the most in social-emotional learning and skills, as part of its long-term ‘Skills for Social Progress’ project and its Education 2030 framework. The OECD’s Andreas Schleicher is especially explicit about the perceived strategic importance of cultivating social-emotional skills to work with artificial intelligence, writing that ‘the kinds of things that are easy to teach have become easy to digitise and automate. The future is about pairing the artificial intelligence of computers with the cognitive, social and emotional skills, and values of human beings’.

Intuitively, it makes sense for schools to focus on the social and emotional aspects of education, rather than wholly on academic performance. Yet this seemingly humanistic emphasis needs to be understood as part of the globalizing move by the OECD and others to yet again reshape the educational agenda to support economic goals.

Data
The fourth keyword is data, and it refers primarily to how education must be ever more comprehensively measured to assess progress in relation to the economy. Just as the OECD’s PISA has become central to measuring progress in the knowledge economy, the OECD’s latest international survey, the Study of Social and Emotional Skills—a computer-based test for 10 and 15 year-old young people that will report its first findings in 2020—will allow nations and cities to assess how well their ‘human capital’ is equipped to complement the ‘robot capital’ of automated intelligent machines.

If the knowledge economy demanded schools help produce measurable quantities of human capital, in the robot economy schools are made responsible for helping the production of ‘human-computer capital’–the value to be derived from hybridizing human emotional life with AI. The OECD has prepared the test to measure and compare data on how well countries and cities are progressing towards this goal.

While, then, automation does not immediately pose a threat to teachers–unless we see AI_based personalized learning software as a source of technological unemployment in the education sector–it is likely to affect the shape and direction of education systems in more subtle ways in years to come. The keywords of the knowledge economy have been replaced by the keywords of the robot economy. Even if robotization does not pose an immediate threat to the future jobs and labour market prospects of students today, education systems are being pressured to change in anticipation of this economic transformation.