Posted on December 6, 2017 by Ben Williamson

I was asked to prepare a few things to say to launch my book Big Data in Education: The digital future of learning, policy and practice in the Faculty of Social Sciences at the University of Stirling. Below are my notes. 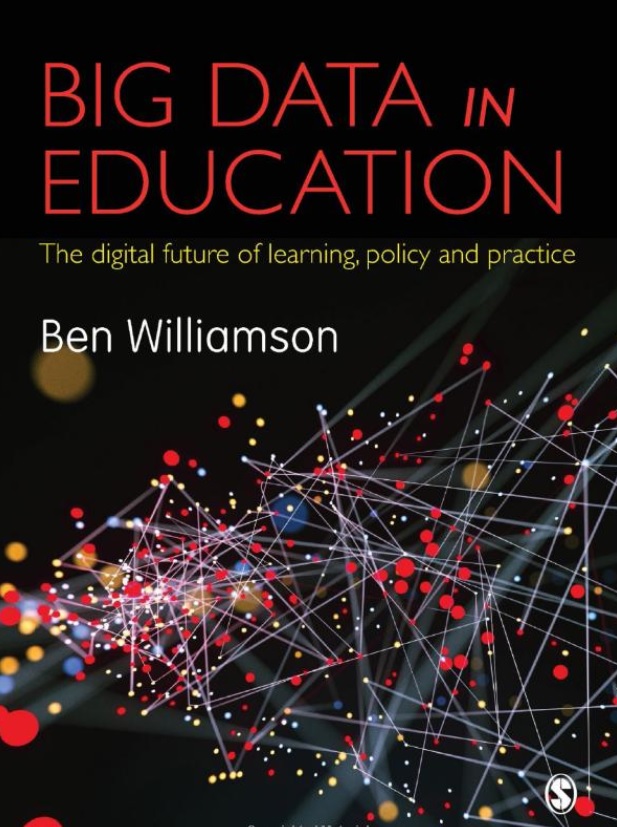 Seven years ago, like many other well-off parents in San Francisco, Max Ventilla was scoping out local schools. What he saw appalled him. State education, he concluded, was dangerously broken; a new model of school was required.

So he got a load of ‘progressive’ education literature about the state of American education, child-centred learning, school accountability, education technology and school design. He quit his job at Google, where he ran projects using big data to profile its millions of users, to set up his own new school.

AltSchool, as he called it, would be a ‘lab school’ combining child-centred progressivism with big data methods to deliver ‘personalized education’.

Max called venture capitalists he knew in Silicon Valley. 33 million dollars later, he hired teachers, managers—and a team of data analysts and software engineers to work on a ‘new operating system for education.’

Mark Zuckerberg of Facebook, among other investors, gave Max another 100 million for more AltSchools.

The tech and business press went wild. The Financial Times called AltSchool an example of ‘Silicon Valley’s classrooms of the future.’

Then Max revealed what his engineers were up to.

They’d built a software platform that could crunch data about almost everything students did. Student work could be uploaded to the system. Teachers’ responses would be logged. This all fed into a ‘Progress’ app—a ‘data dashboard’ displaying the progress students were making in academic learning and social-emotional development.

A ‘Playlist’ app was developed to recommend personalized tasks for students based on analysis of their past performance and predictions of their likely future progress.

Then AltSchool revealed it had cameras everywhere, tracking every movement and gesture of each student to assess engagement and attention.

Critics started to call it a ‘surveillance school’—using students as ‘guinea pigs’ for experimental data analytics. But Max and his investors, wanted it to scale-up across state education, to make more schools look like AltSchools.

Max had figured out a business model to satisfy investors. The AltSchool software platform would be offered for sale to all schools, starting in 2019. Meanwhile, last month Max shut down two of his lab schools, with three more to close in spring.

With the experimental beta-testing over, now Max and donors such as Mark Zuckerberg want to install the laboratory in every school.

AltSchool is prototypical of big data in education, and highlights a number of themes explored in the book.

So this book is about how educational data are produced and for what purposes, and about the technologies and companies that generate and process it.

And it’s about fantasy. A ‘big data imaginary’ of education is not just hype dreamt up in Silicon Valley, but a normative vision of education for the future shared by many. It has a seductive new data discourse of ‘personalization,’ ‘adaptive learning,’ ‘student playlists,’ ‘learning analytics,’ ‘computer-adaptive testing,’ ‘data-enriched assessment,’ and even ‘artificial intelligence tutors.’

It’s about science, with psychological, cognitive and neuro-scientists becoming expert in the experimental uses of student data.

And it’s about challenges to education research. Education research usually deals with human learning within social institutions, but now nonhuman ‘learning machines’ that can learn from and feedback to their human companions are starting to inhabit learning spaces as well. Some social science education researchers feel under threat from ‘education data science’ too.

Finally, the book is about power and the everyday ‘public pedagogies’ that teach lessons to millions globally, not just in educational institutions. Social media’s trending algorithms and filters direct attention to current events, politics, culture, and more, based on calculations of what you might like, what you’ve done, who you know. Tastes are being shaped, opinions and sentiments tweaked, and political views targeted and entrenched by political bots and computational propaganda. The power of big data in education extends beyond school to these public pedagogies of mis-education too.

This entry was posted in Uncategorized and tagged big data. Bookmark the permalink.